I finished up this one this morning.  I may be a little slow on things for a while right now because of all the Jewish holidays, but I’ll get out what I can.  I wanted to do another mixed coffee and tea painting.  I think I need a heavier weight paper.  Hopefully once I figure out which paper I like from the samples Blick sent me, I can get some 300 lbs paper.  Maybe that will work better for my initial washes.  The 140 seems to work fine for watercolor, but not so much for doing washes in coffee and tea.

This one is now available here, and the full length video is available on my Patreon page.

This one was really frustrating for me.  The raspberry tea that always turned a nice shad of purple for me decided to just go darker and darker shades of blue.  Same paper.  Same brand of tea.  Same mixture, but blue instead of purple.  I grabbed some wine in hopes of saving it.  It turned out ok enough.  It wasn’t what I was going for, but we can just say that she’s frozen under ice and maybe that’ll work.  I’ll have to do a wine painting and see how that turns out.

This one is now available on my storenvy page.

I was tired of tying each tea one at a time to see which ones worked, so I just mixed them all up and painted with them all at once.  Pretty much all the berry teas are fairy equal in color.  It’s just different variations of a gray purple.  Raspberry gives me the best purple and I liked the other brand I was using better than the one I tried for this piece.  This brand didn’t get as violet as the other one.  The lemon ginger tea gave me a yellow green color, and the peach tea gave me an yellow orange color.  My painting smelled very fruity before I varnished it.  The full slowed down version of this video is now available on my patreon page.

This piece is now available on my storenvy page.

While you can varnish watercolor paper, it is a little different than varnishing canvas.  It still needs to be framed behind glass to protect it from water and humidity, but a varnish can help prevent fading.  You want to get a matte spray varnish.  I use the matte spray varnish by Golden.  It’s archival and offers UV protection.  There’s not much of point in using a varnish that isn’t archival.

With coffee and tea, you want to varnish as soon as you can because it’s not just contact with light that causes it to fade, but also contact with oxygen.  It needs to be completely dry first, but after that, varnish it.  Watercolor can wait a bit if you keep it out of the light.  Even if you get acid-free paper, there’s still acid in the coffee and tea.

Hopefully that’s helpful.  If you try it out, let me know how it goes.  Also if you have any questions, leave those in the comments too!

3 Things Not To Do With Your Brushes

Are You Using the Right Watercolor Paper?

1) Tea, except herbal teas, is made from the same plant, Camellia sinensis.  Black, green, and oolong tea are all plucked from the same brush, but go through different processes to end up with those flavors.  Black is fermented.  Oolong tea is semi fermented, and green tea is unfermented.  White tea is also unfermented, but are baby tea leaves, taken before the buds open.

2) Until the 19th century, nearly all tea was grown in China with Great Britain as the main exporter.  Because trade with China became difficult, Great Britain began smuggling plants out of China and setting them up in regions or India and Africa, which are still major exporters.

3) Even though China grows the most tea, they don’t drink the most tea.  The citizens of the United States of Emirates drink 14 lbs of tea a year.  The British come in 7th and the United States comes in 69th of the top 100.  Between everyone, tea is the second most consumed beverage in the world with an average of 3 billion cups a year.

4) The tea bag was actually an accident.  Thomas Sullivan, an American, sent out samples in silk bags.  No one knew to take the tea out of the bag and just threw the tea in with the silk bag.  He then started making ready-to-use bags out of gauze, and the now the tea bag is the most popular way to drink tea.

5) Green tea is know to have many health benefits, such as fighting against heart disease, certain forms of cancer, and diabetes.  It can also help lower cholesterol.  Some of the findings have been disputed, but many doctors agree that a cup of green tea a day will do good things for your health!

What other interesting facts do you know?  Tell me about it in the comments below! 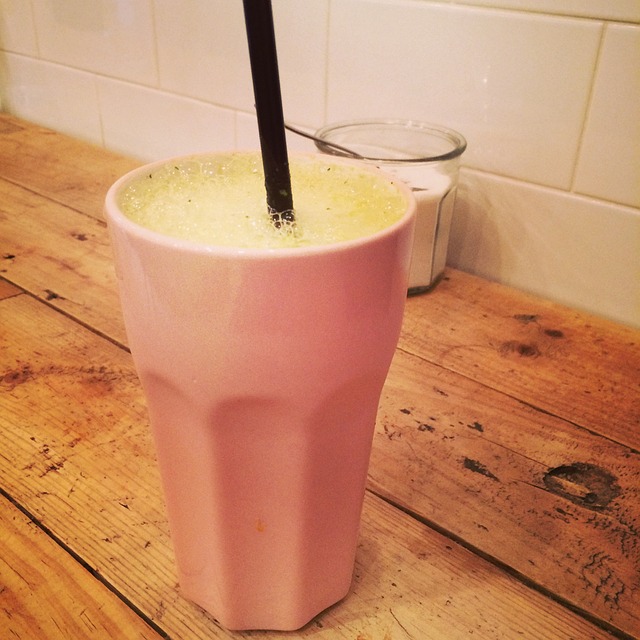 I love raspberries, and I also enjoy tea, so when I saw this recipe on a blog I follow, I had to try it.  I think it’s awesome and you should try it!  Mixing up my coffee and tea is nice every once in while.  I may have to try some more smoothie recipes.

Here’s the recipe that you can find on raezcafe.wordpress.com:

1.Place all of the ingredients in a blender and blend until smooth.

If you try it, you should tell me about.  How did you like it?  Leave a comment below or take a picture and tell me about it #shalevbasya.  I’m sure #raezcafe would like to know about it too.

Here are some more blog posts you might enjoy:

The name pretty much tells you what these colors do.  A staining color will severely stain your paper so that it’s difficult to lift back to white, and if you try you will pretty much have a varying degree of the tint of color left behind on your paper.  This happens because they immediately absorb into the paper before the water starts evaporating.  Where as in the non-staining colors, the paint dries on the surface of the paper after the water evaporates.

Both have their usefulness and if you’re a beginner, you probably want to stay away from the staining colors for a while.  They make it harder to fix things, and they also tend to dominate other colors.  However, once you’re more comfortable, you should definitely give them a try.  They’re among my favorites to paint with because they’re so vibrant in color.

Coffee and tea are staining, but it depends on the strength of the brew as to how staining.  If I’m using one of my lighter color, I can lift to white, because there’s more water and less of the “paint.”  Coffee takes more effort.  However when I’m using my darker tones with the stronger brewed teas or coffee, lifting to white is not going to happen.

With the new baby, I haven’t had much time to paint, and the new brushes I bought ruined my last painting.  So, I’ll be going back to my old brushes.  This is just the light initial drawing.  I had to really hype up the contrast so that you could actually see it.  The drawing itself is barely noticeable.

I do a lot of cups in my paintings.  It kind of goes along with painting with coffee and tea, but I wanted to paint something with flowers.  This seemed appropriate and interesting.  I have my cups, and flowers, with the added bonus of an alarm clock.  Vote bellow if what me to paint this with coffee or with tea, and check back next week to see what progress I made!

July 12, 2015July 11, 2015 by shalevbasya Categories: Paintings, ProgressionTags: #art, #coffee, #painting, #tea, #watercolor 1 Comment
In case you didn’t see my posts from the other site.  Here’s the post of the review of some supplies I ordered from dickblick.com.

Ok.  So I finally had some time to play with my new art supplies in between taking care of my cute little one.  The first thing is my FAVOURITE!  I love these little glass jars.  I can pour hot water into them to mix up my paint, and then put a lid on them so nothing spills when I’m not using them.  I had to write on the lids to tell the difference between the coffee though.  Otherwise, they get mixed up when you move them.  Oops.
I already knew I liked the Canson XL watercolor paper because, I was already using it.  The Stanislaus brush set that I got didn’t work out.  Even though it’s advertised for watercolor and acrylic, it’s too stiff for watercolor.  I would consider it more of a craft acrylic brush.  I’ll probably keep them for that, but I’ll need to get different brushes.  These were cheap.  So at least I didn’t spend a lot of money on something that didn’t work out.  This is why I don’t have a painting for you guys.  Even though I had time to mess around a little, the brushes ruined my painting.  Sadness.
The Golden Archival Spray Varnish seems to work out alright.  My only suggestion is to make sure it stays outside for a while, or in a very well ventilated room.  The fumes are not pleasant.  I also tested the Sakura Micron pen on the painting that didn’t work out.  The pen works nicely.  I’ll have to redo the painting thouh.  I think it’ll be easier signing with the pen than how I have been doing it.  Hopefully they’ll be a new painting for you soon!
July 6, 2015July 7, 2015 by shalevbasya Categories: Review, SuppliesTags: #art, #blick, #coffee, #Golden, #Review, #supplies, #tea Leave a comment

After the frustration of my last coffee painting, I needed some tea time.  I tried chai at first, but I couldn’t get a dark enough pigment with that either.  So back to raspberry.  I need to get some more fruit teas and experiment with those.

I started out with a light drawling.  The actual drawling is lighter than this.  I just hyped up the contrast in the photo so you could actually see it.  I don’t drawl everything.  Just enough to know where to put my base layers.

Here are the first layers, getting the form of the cup and the hands.  The tea dries slower than the coffee, so my tea paintings take longer than my coffee paintings.

Now for some more layers and definition.  Painting with the raspberry tea is always an interesting experiment.  Parts of stay a grayish blue, and then darker areas turn various shades of purple.

I was happy with the amount of purple I was able to get into this piece.  I think it’s kind of become my signature to always have cup in my painting, which I’m fine with.  So maybe once I’m able to do larger pieces.  (I have better supplies.  🙂 )  I can be more clever with my cups.

This piece is now for sale on my storenvy page:  shalevbasya.storenvy.com